Nuclear should play a significant role in a UK energy mix that excludes fossil fuels. But reluctance to widely adopt it, due to some lingering fears and wavering Government support, leaves too big a gap for renewables alone to fill. If the nuclear sector is to lead the UK in combating climate change and providing reliable energy, it must do more to gain the public’s confidence.

That was the message from renowned carbon footprinting expert, Mike Berners-Lee, at the second warm-up event to the Cumbria Nuclear Conference. Sponsored by Tetra Tech and partners CoNE and NuGen, the Carlisle MP John Stevenson hosted the event at Rheged, near Penrith, with representatives from a wide spread of business, community, and educational organisations.

As the Director of Small World Consulting, Mike has advised firms like Booths, BT, and Microsoft on reducing their carbon footprints. Reducing the exponential rise in carbon since the 1800s, however, doesn’t gel nicely with our continuing reliance on fossil fuels, from which the UK still derives over half its energy generation. 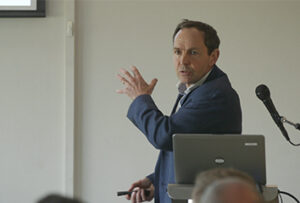 During the event, Mike said: “We have to leave fossil fuels in the ground if we are to have any chance of staying within a two-degree rise in temperature – a rise that we know will have a dramatic effect on the world…Nuclear can certainly bang that drum.”

But despite a clear need for it, the outlook for nuclear appears troubling. While it currently comprises about 20 percent of energy generation, there hasn’t been a new plant in over 30 years, and by 2030, many existing facilities will have been decommissioned.

Renewables like wind and solar may gain a larger role in nations with more forgiving climates, but Mike and Simon argued the UK could never take full advantage of them with its restrictive onshore planning policies. Being one of the poorest nations per capita in the availability of solar only adds a further obstacle.

There are encouraging signs, though. As Mike put it: “There’s a lot stronger case for nuclear in the UK than in other countries…my challenge would be for the sector to gain trust – to be honest about the cons as well as the pros – and have a really robust debate about why nuclear power is needed.”

He called on subsidies for fossil fuels to be scrapped and the price of carbon to be dramatically increased, arguing that these savings would be more than enough to cover the relatively high cost of nuclear power. 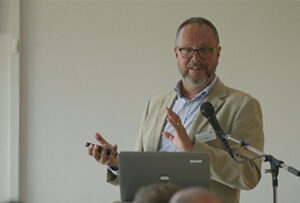 The one saving grace of fossil fuels, according to Simon, is that they are becoming increasingly difficult and expensive to obtain. With the Government implementing progressive policies, such as a real carbon price, the road seems paved for a gradual reduction of the most polluting fossil fuels.

Speaking after the event, Simon added: “From where we are standing now, nuclear appears to be the only sensible non-carbon option. The sector has done a lot to improve reliability and safety, as well as stewardship of waste materials, but if the green lobby doesn’t want nuclear, then what do we want? We need to stop burning finite resources, but something still needs to power the grid.”

The Cumbria Nuclear Conference will take place on Friday, September 21. We are proud to sponsor this event after having supported the region as a centre of nuclear excellence for over 30 years.

Want to get in touch?